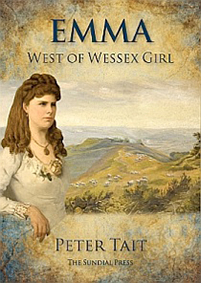 as Hardy, would recall seeing the silhouette of her riding along the crest of Beney Cliff.  He would remember with a feeling of agitation the scene that lay before him, stripped bare of everything, but the most elemental. A bent tree, doubled up by the westerlies; an evening sky exploding in a fiery tempest; and, set against it all, a horse and its rider. She looked magnificent, like Boadicea, thick auburn hair billowing out behind her, standing high in the stirrups. He watched her as she fell off the edge of his view into a furze covered gulley and disappeared. Yet it was frozen in his mind, the picture of the high-spirited and unsettling young woman, that he could recall at will for the rest of his life.

Time can give a gentle wash to memory, that he knew. It can smooth out the rough edges and make mellow the astringent, destroy the glass cage. But Tom knew in that one vivid snatch that what he had seen was real and that whatever else changed in time, that image would remain indelible. A rider on a horse skirting a cataclysmic sky. A heart aloof and vagrant, one and the same. His West of Wessex girl! He felt the first drops of rain. What had become of them? What had happened to pry loose the grip that once held him so tightly?  What had led him to betray her? 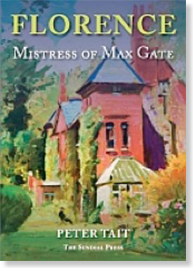 oment she first met Thomas Hardy in 1905, having written him an admiring letter, Florence Dugdale seemed destined for controversy. Her presence at Max Gate, both before and after the death of his first wife Emma, and her clandestine courtship with a man nearly forty years her senior sparked suspicion among the locals and scorn from the Gifford family. She had wanted to be a writer herself, but was drawn into Hardy’s life as his ‘secretary’ and companion, and within a year of their own marriage was humiliated by his publication of poems commemorating the late Emma and his painful relationship with her.

Yet in the posthumous biography of her husband that bore her name she would tell the ‘truth’ and at last achieve the acclaim she sought – or so she had imagined, until that fiction too began to unravel. After fourteen years of marriage, and despite her own gifts and her life thereafter, her fate was to be remembered by her obituary tag in a national newspaper – ‘helpmate to genius’. Her love life stunted, her literary ambitions thwarted, disowned by the Stoker family and satirized by Somerset Maugham – Florence’s lot was an unenviable one. Why did she put up with it all? In his compelling recreation of Florence’s life, Peter Tait tells of a letter, one that Hardy had written to her on the eve of their wedding, which she kept until her death, when, under instructions, it was destroyed … ‘And with it died part of the secret, the secret that helped explain Florence. For, as Thomas found out to his cost, there was more to Florence than was evident from their first meeting. And so began their trail of deceptions, first of Emma, then of their friends and, finally, of us all.’